A Heraclean effort this morning for a final early visit to the Eastern Kalloni Saltpans revealed a strange coolness to the air that required the emergency provision of long sleeves!

Orion glimmered overhead and the ISS cut through the inky blue on its latest circumnavigation. Up with the Lark was an appropriate phrase as the Cresteds were already singing in just the faintest pre-dawn glow as we walked down the track.

The spectacle of waking large waterbirds was as magnificent as every visit and the frenzy started way off in the middle pans before ending up right under our noses once again. There were 13 Dalmatian Pelicans, 22 Spoonbills, 12 Black Storks and the usual agglomeration of Grey Herons and snaky necked Great Whites along with the dark phalanx of Cormorants. 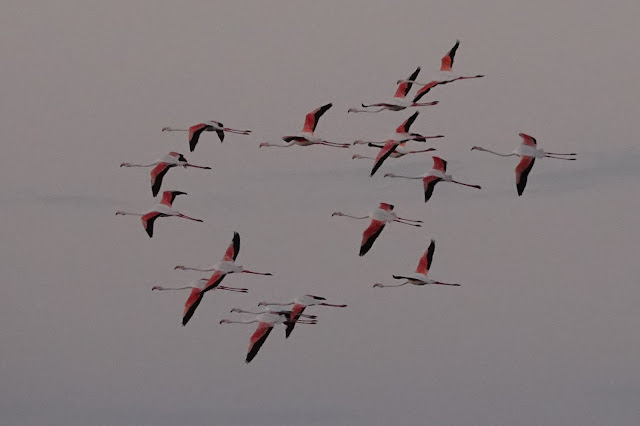 Sound off for this one as it was a little breezy 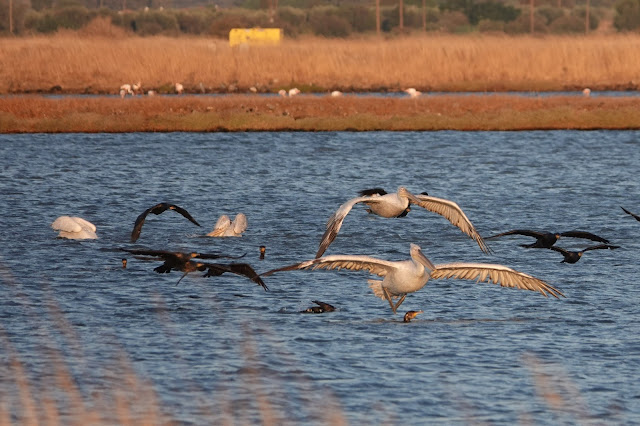 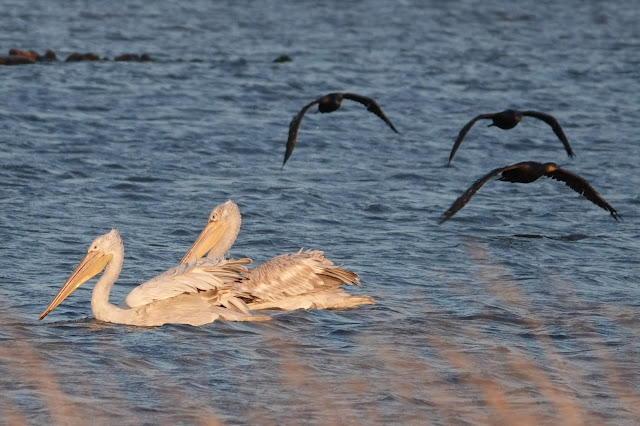 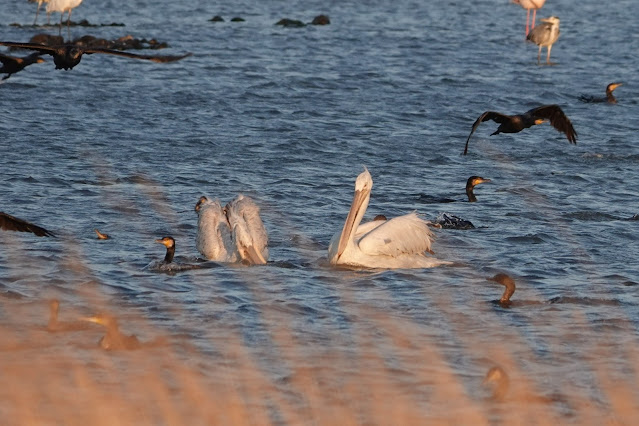 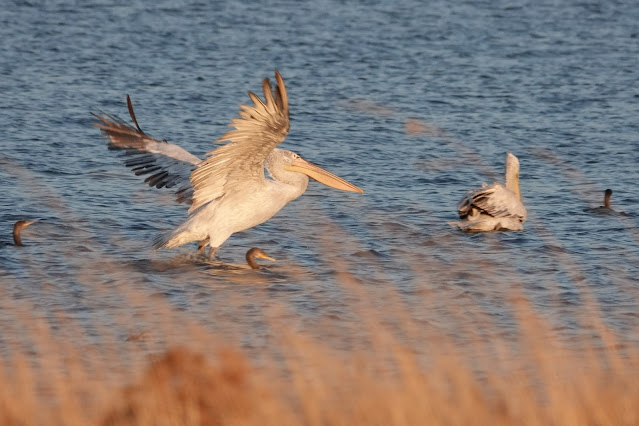 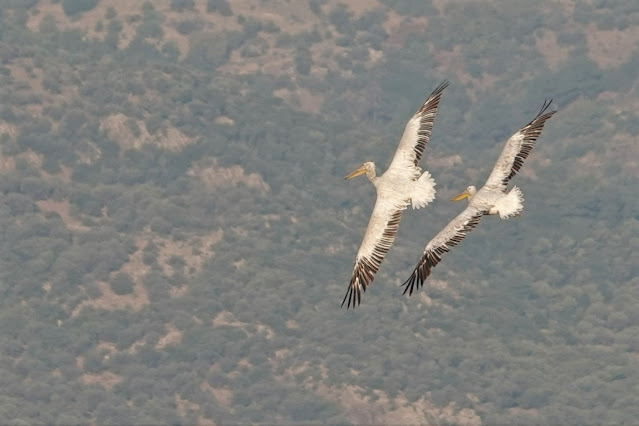 I could hear Sandwich Terns but could not find them and a couple of Grey Plover could be heard while an invisible Kingfisher zipped by calling.

Mallard had reached the dizzying heights of 26 with three Teal, a Shelduck and two Ruddy Shelduck. A big Gull caught my attention in flight and I was quite happy that it ticked all the boxes of a 2w Caspian. Corn Buntings headed out from their roost and Tawny Pipits called overhead along with a few flava Wagtails and a Tree Pipit.

We walked back and checked out the first pan but there were only a few small Plovers and just singles of Redshank and Greenshank. A synchronised flock of flying Stone Curlews momentarily had me puzzled before all 13 landed on the main pan bank way off near the road.

Back for breakfast and then off towards Mesa Sanctuary. The Steppe Buzzard was absent but a spangled juvenile Sanderling was a pleasant surprise on Kalami Pool where it scurried amongst a few LRPs, Kentish Plovers and Little Stints. This is the first I have ever photographed here as they are usually miles away! 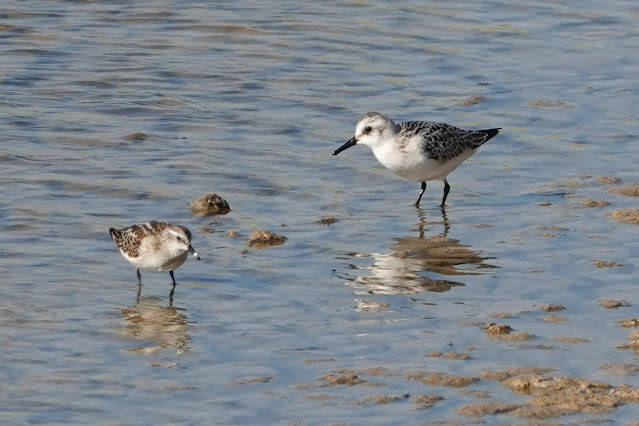 The Temple of Messon (or Aphrodite or Zeus - you take your pick) was open and unsurprisingly we were the only visitors to this 2600 year old site steeped in layers of Greek, Roman and Christian history. A female Sparrowhawk circled over and Willow Warblers, a Whitethroat and Spotted Flycatchers were in the Junipers. 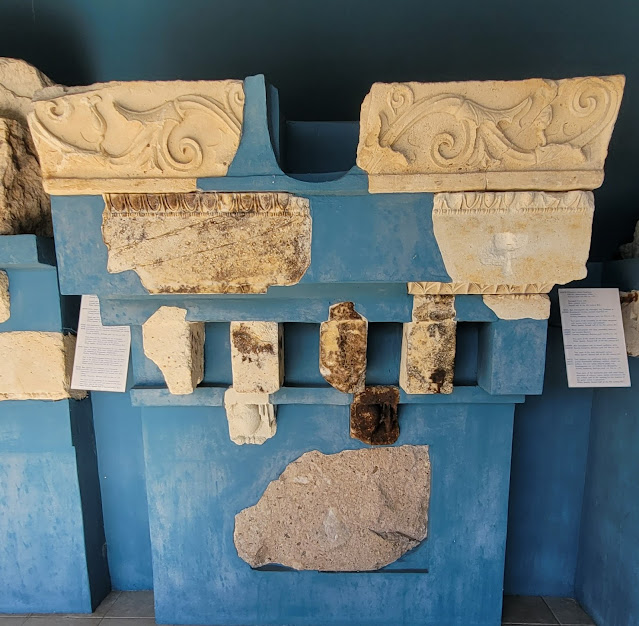 On to somewhere new and our search for the Temple of Apollo at Klopedi began on the track before the road to Kremasti with no signage whatsoever until we were two miles in. Ravens were in the air at all times and kronking could be heard all the way. We crossed what I think was the Tsiknias which had pools in sheltered corners and a few small birds coming in.

My sat nav was taking me on the clockwise side of a loop to the site (albeit in the opposite direction to the sign) and the track was somewhat tenuous as it clung to the river bank in the over wash zone from a flash flood but it soon became better as we moved away from the river.  At this point I quite clearly heard the Google Map lady say ‘you are going completely, utterly and totally wrong’ before falling silent again.  I could clearly see that my track went where we wanted to go and pressed on only to find the path blocked by a fence.  I was sure I could hear her sniggering.  Thankfully I could turn around and head back to the bridge and carry straight on as per the sign which soon took us onto a short stretch of concrete road that climbed again to this large archaeological site that actually overlooks the saltpans. Despite saying it should be open, the visitors centre and gates were firmly shut and we had to look from the outside but it was still very impressive and must have had a commanding view. 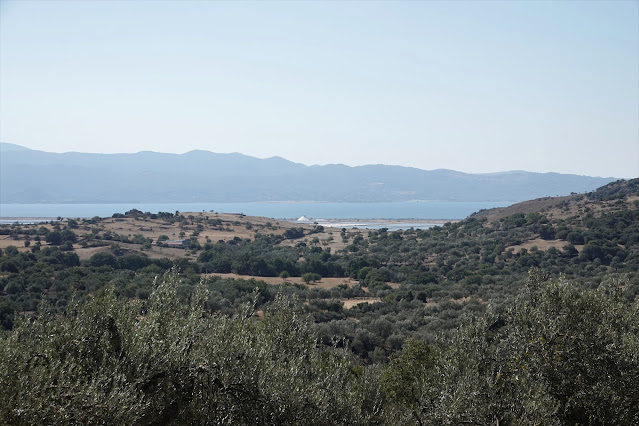 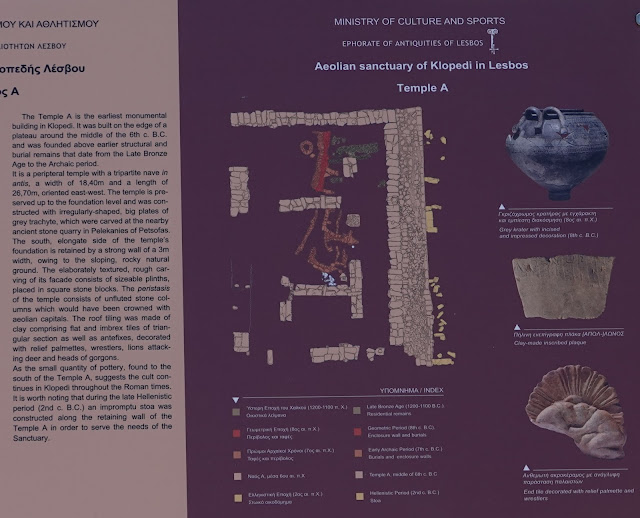 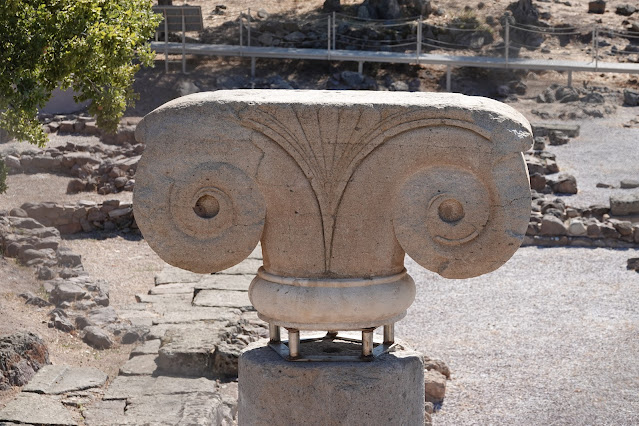 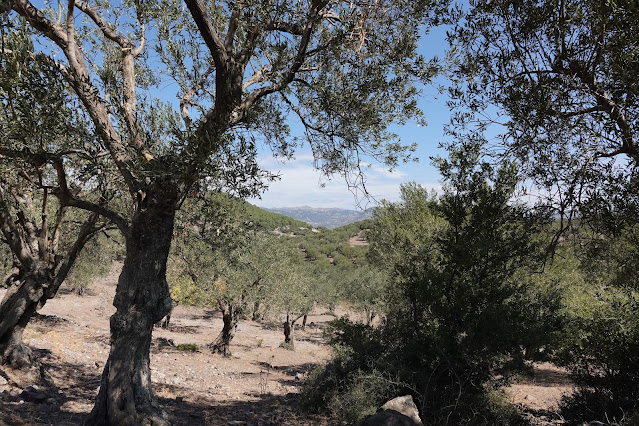 I followed the track west from here pausing to watch Graylings and the first Lesser Fiery Copper, Honey Bees and a Small Skimmer where a stream crossed the road. Levant Water Froglets hopped out of the way and a Grey Wagtail bounded over while Goldfinches, Serins and House Sparrows were very vocal but out of view up stream. 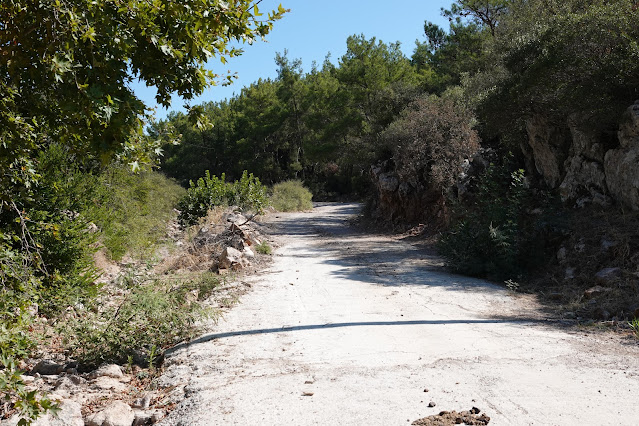 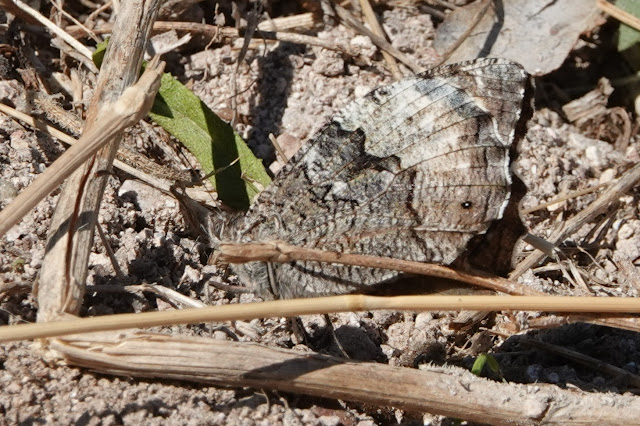 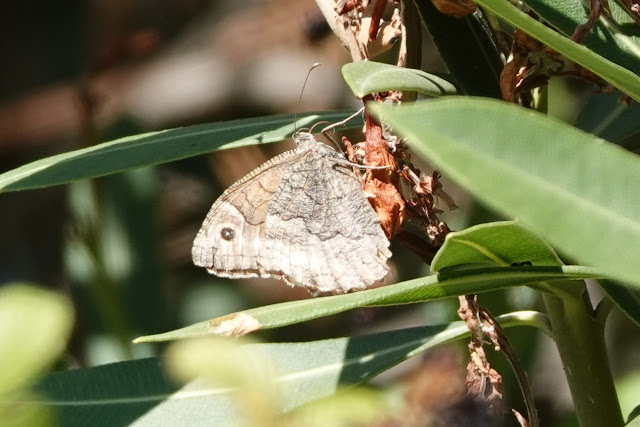 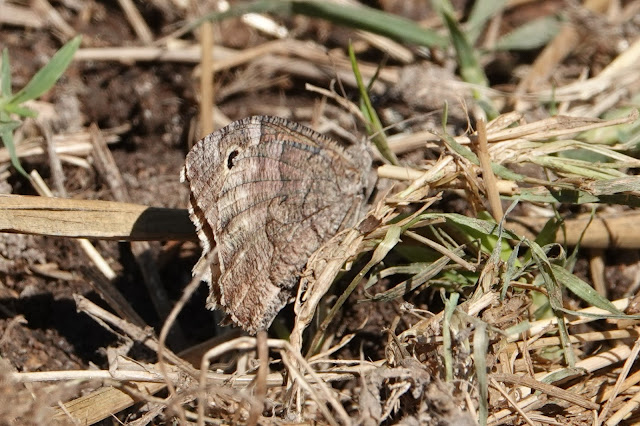 I was surprised to pop out on the Kalloni - Petra Road at the army base on the lower bend where the goats normally hang out!

Lunch and bag packing followed before I escaped for a Bay paddle once again. A deceased Flatfish had me fooled for a while as it posed for pics and I saw a couple of Crabs with flat Sponges growing on them. Yellow-legged Gulls and a couple of Shags were the only birds.


A last pre dinner drive out through Loutzaria to the Alykes Sheepfields gave us some quality Shrike views and a glorious cinnamon Purple Heron highlighted against the vivid red of the autumn Salicornia at the Tsiknias river mouth where 12 Shags loafed on the bar. 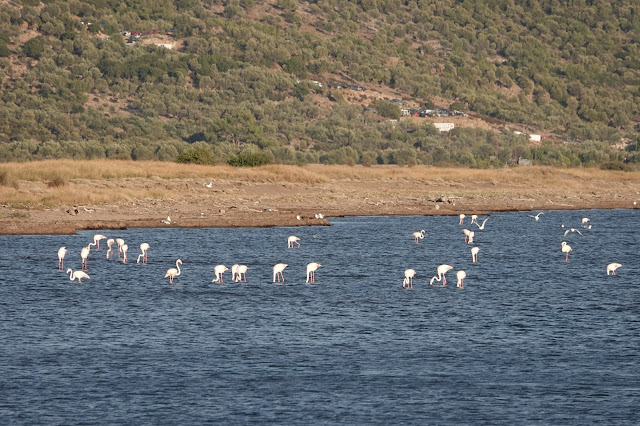 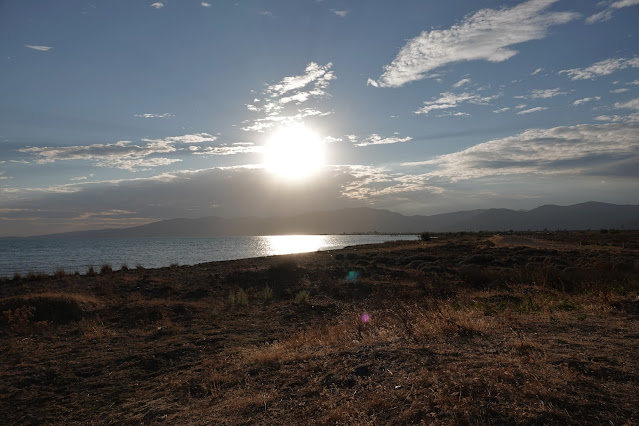 A final dinner was taken at the Dionysos with low level Bats accompanying our walk back to the car.