I have to admit that I was flagging a bit with the continued heat this time so there was no early start again. We poodled out post breakfast and headed around the Bay towards Mesa with the intent of looking for the Northern Lapwing at Kalami Pool.

As I came off onto the old road I spied the Steppe Buzzard on one of the lampposts looking all warm and chestnutty in the morning light. It would have been a great shot but he soon moved up to the telegraph poles and I had to play catch up. I must check when I first saw this distinctive text book bird here.

The Lapwing was absent with only a few Little Stints and Little Ringed Plovers so we moved onto the Mesa Sanctuary- the Temple of Aphrodite and the geographical centre of Lesvos if memory serves. I had forgotten that it is closed on Tuesdays but we peered through the fence anyway. A Turtle Dove was on the wires and there was a mixed flock of House and Spanish Sparrows along with Chaffinches and Cirl Buntings. Spotted Flycatchers and Whinchats hunted from the fences.

On up to Agia Paraskevi and the track through the dusty olive groves east to the remarkable Basilica of Halinados - a very early Christian temple dedicated to St George that we visited for the first time last year. It is a tranquil, calming spot with just the susurration of the breeze in the huge pine just beyond the walls but as with the majority of the island's historical sites there is not one piece of interpretation either there or even on line to give you some clue as to its clearly ancient origins. It oozes great age. The groves themselves were quiet with just a few Chaffinches, House Sparrows, Great Tits and the odd Woodpecker and Spotted Flycatcher. Starred Agamas head bobbed from rocks and only Ravens broke the monotony of the blue heavens. 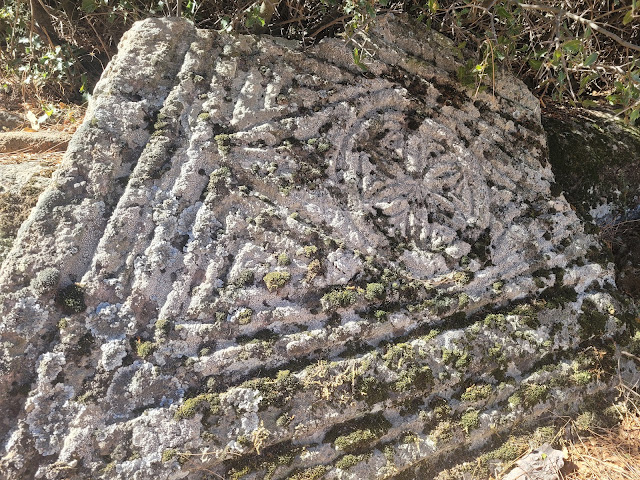 Kremasti Bridge was next on the cultural tour and we walked over the top of this impressive medieval structure while Ravens once again ruled the skies in tumbling effortless gangs. A Sparrowhawk dashed south and there were a couple more Spotted Flycatchers but nothing else.

Onwards through Mantamados and then back west through the cobbles of Kapi and Pelopi to find the geological wonder of the lava columns by the roadside where Crag Martins circled above followed by lunch in Anaxos and the wiggle homewards.

A brief stop at the Kalloni Raptor Watchpoint gave me a group of five distant Honey Buzzards south and the now ever present Ravens and a delightful single spire of Autumn Squill poking defiantly through the recently fire blackened ground.

An Ice-cream and a chilled evening followed with a paddle at knee depth along the edge of the Bay were I was able to find two Sea Hares grazing in the Eelgrass in the now crystal clear waters. There were some cool Blennies, Hermit Crabs and mobile Molluscs and silver fish of various sizes were leaping clear in all directions. I had the whole stretch to myself...

An after dinner walk around the block ostensibly to check the Oleanders for any huge nectaring moths resulted in no moths, lots of Bats, the very curious once illuminated 'Melemi Thong Lights' as they became known, street light grazing sheep and a Grey Bush Cricket species that would have needed an intimate examination to specifically identify!