News broke too late for me to dash to Norfolk yesterday for the Ruppell’s Warbler at Holme but by 3.45am Paul W, Peter S and myself were on our way to be there at first light.  It was a bitterly cold night and the clear skies did not bode well. We joined a quickly lengthening queue and were probably within the first 60 people. By 6.15the news came back that this first year bird was still there and a subdued cheer went up.  We got into the elder thicket about an hour later and immediately had it slowly and deliberately feeding through the foliage with the sun illuminating it.  I was expecting a little brown job and not a near Dunnock sized beautifully pale grey warbler.

With the important task of the day safely sorted we went for a seawatch and although it was blowing from the west it proved worthwhile sitting in the Marrams with an embarrassing year tick on the shape of an Arctic Skua or ten shortly followed but a classic cold grey and white juvenile Long-tailed Skua and then a half streamered sub-adult on buoyant wings  A lone Great Skua made it three species and many Terns, Teal, four Gannet, four Fulmar and shimmering Knot headed through.

Holkham was our next stop and five juvenile Ruddy Shelduck were quickly picked up before making our way to Cley Coastguards for a post Beans on Toast amble which produced a fine adult Med Gull and a Black Tern.  All in all a very fine day with a lifer and four year ticks.

The female Sparrowhawk circled over the garden [Eds: Ilford] once again!!!

Paul W had some business in Norfolk and therefore I tagged along for the ride and some add on birding.  We made our way to Breydon and the Little Egret at Burgh Castle.  It had been seen each recent morning and on cue it was almost the first bird we saw as it preened an a small grassy island. At last a half decent bird at Breydon.

The Osprey did not show at Strumpshaw and it was very quiet although there were both Marsh and Willow Tits and a singing Cetti’s Warbler.  There were many Migrant Hawkers and Darters and the Ivy was attracting Hornets, Bees and Hoverflies [Eds: 1st mention ever of Hovers I think!].  Coastguards at Cley and lunch beckoned.

The Greenish Warbler was still present at The Hood so we trudged up Blakeney into a stiff westerly but still got satisfactory views of this pale wing barred warbler as it fed in the Sueda. The sea was quite rough so Paul and I hunkered down for a seawatch, not that we saw a great variety of species but just a single bird that fluttered by just offshore.

It was obviously a black and white Shearwater and we both immediately exclaimed at the sight of a beady black eye in a white face. Realising what we had got we took detailed notes as it circled around just off the beach.  Could it be anything other than a Little Shearwater?

The initial impression was of a differently proportioned Manx-type Shearwater with the aforementioned striking face pattern. The body appeared short in comparison with the wing length being compact in the head and neck area while the hand of the wing also felt shorter and more rounded at the tip than a Manx. It was smaller than a nearby Sandwich Tern and the bill was small and grey black and inconspicuous; protruding from the white of the face rather than the black.

The flight pattern was unlike any Manx either of us had ever seen previously consisting of five-six short stiff flicks followed by a very short glide on stiff, slightly decurved wings.  It appeared to flick the whole wing and not the hand.  It kept at a stable height of a couple of feet above the waves and only deviated from a straight course when it banked in an attempt to get back offshore instead of being beached which it almost landed on a couple of times!

It drifted west and so we hurried back to Coastguards passing Black Terns on the way but no one was around so we headed to Steve Gantlett’s house in the village to look through his books while it was still fresh and to seek some advice. He was very helpful and reckoned that we certainly had more than enough to get it through.

[Eds: Somewhat disappointingly it did in fact get rejected by the BBRC although we never found out why but I am sure that Paul had it re-submitted some years ago after some of the features we noticed became more relevant over time… anyway, it’s on my list and is going nowhere!].

An overnighter to Cornwall with Stu and Peter G for one of the only two British regulars that I now needed – a Buff Breasted Sandpiper. The weather going down was torrential  and we arrived at Davidstowe  Airfield before first light after meeting Bob at Exeter services. We drove around this huge disused airfield in the sporadic showers searching for the Ringed Plover and Dunlin flock and there amongst them was the tiny delicate Sandpiper.  It was much smaller that I was expecting and by using the car as a hide we never needed to even get out.

The Dotterel eluded us though so we headed to nearby Trevose Head for a seawatch that netted us two Sooties, a Cory’s Shearwater, two Manxies and a Cream Tea – it was good to see the other species in relation to the Little at Blakeney on the 8th.

We popped back for sunnier seconds of the Buff-breast and a Ruff and were back home by 6pm! 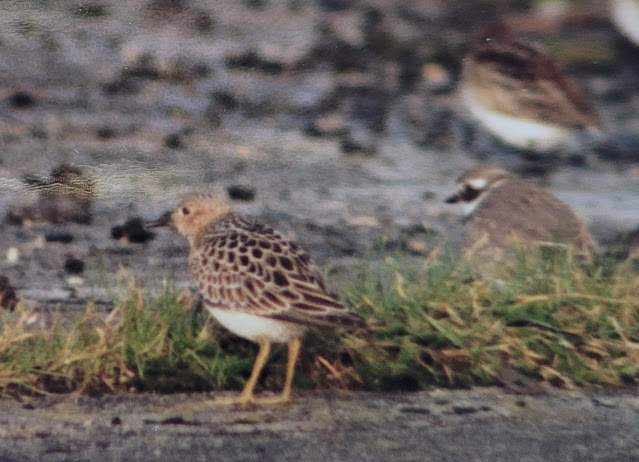 [Eds: Despite spending an inordinate amount of time on Davidstowe over the last 30 years I have never seen another good bird on there – in fact not even a wader that was not a Lapwing…]

A nearly total waste of an afternoon at Portland where the Bobolink had done a vanishing act mid-morning but we did see two obliging Tawny Pipits in one of the fields.

Off we go again – this time to Inner Farne in Northumberland in search of a real mega – a Yellow-breasted Bunting. Not usually turning up away from Fair Isle that was the first attempt that many birds would have had for one. I left home just before 2am and met up with Stu in Newmarket for the long journey north.  A Big Breakfast at a Little Chef was in order as our boat was not until 9.45 and at nine the news came through that it was still there and with a raucous cheer everyone dashed for the boats hoping for an early crossing.  By 9.40 we had the bird safely in the bag as it grovelled about n the thistles. It was chased mercilessly so I stayed back and enjoyed it from a distance and it felt to my eyes like a slightly odd shaped Bobolink!

After some great views we caught our boat back with nowt else bar a Brambling, Sand Martin, Swallows and a summer plumaged Red-throated Diver for our efforts.  The rest of the day was a total cock up with us only getting the Red-backed Shrike at Flamborough and missing out on all the other East Coast goodies and Stu would not go for the Penduline Tit.  Amazingly another Yellow-breasted Bunting was found at Holme in Norfolk that afternoon. [Eds: Obviously this now one of the biggest blockers on any birder from the early 1990’s list but with a global population crash the next twitchable one will be on scale of the very first Black-faced Bunting I reckon].

An amazing raptor day over the garden with male Kestrel, female Sparrowhawk and a juvenile Hobby that almost took a Starling out of the Rowan!

A mid-morning trip with Roy and Ian W to Languard Point for a Short-toed Lark which we immediately found grovelling about on the Common.  It was a richly coloured bird in immaculate fresh plumage indicating a first-winter bird.  The cap was a very warm chestnut.  It was seen in flight a couple of times when the ‘chi-chirrup’ call was heard.

There were plenty of other birds on the move with 40 Yellow Wagtails, ten Wheatear, many Pipits and Finches and a few Starlings. A Short-eared Owl came out of the Sea Cabbage from where it was roosting.

We stopped at Abberton Reservoir on the way home and found a fine eclipse male Red-crested Pochard and 70 similarly plumaged Pintail. Twelve Black Terns bobbed along with  Commons and two Arctics and there were a few waders on the big island with many Lapwing, a Black-tailed Godwit, two Redshank, eight Ruff and two Stints.

One was clearly a moulting juvenile Little Stint but the other appeared a third smaller and with unusual plumage and a dumpier more hunched shape.  It actually fed more like a Plover at times – stop start but we left none the wiser despite consulting the pics of Little and Red-necked Stint in Lewington. 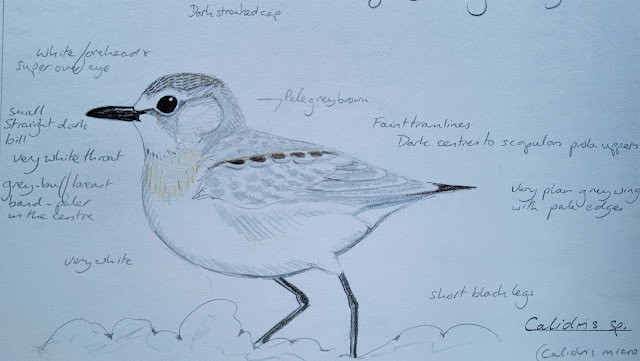 One of those – ‘if only I had come up yesterday’ sort of occasions with the Thrush Nightingale being a no show at Gramborough Hill, Salthouse.  There were a few other birds on the move though with 68 Linnets, ten Greenfinch, Siskin, 35 Goldfinch, four Chaffinch, 37 alba Wagtails, 120 Meadow Pipits, three Rock Pipits, 30 Skylark and three Reed Buntings. Two female Sparrowhawks harassed the migrants and two Ruddy Shelduck incongruously flew by.

Seawatching in the calm conditions was good with ten Arctic Skuas that chased the Terns of which four species were seen including over 200 Sandwich and two Blacks.  Three Bonxies and 15 Red-throated Divers headed east along with 15 Razorbills, three Manxies and a fine stripy headed juvenile Red-necked Grebe.

A large Pipit was located in the main field as we were leaving and was subject to much speculation but despite the darkness of the plumage and small bill the general consensus was for 1st- winter Tawny Pipit.

News broke of a Paddyfield Warbler at Flamborough and we were about to go but Colin had to get home so we dejectedly headed back south rather than north.